TOKYO, Feb. 28, 2018 /PRNewswire/ — Chinese solar manufacturer LONGi Solar Technology Co., Ltd. (“LONGi Solar”) held a press conference in Japan on February 28, 2018, at which the company announced that it had achieved a record 23.6% conversion efficiency with its monocrystalline passivated emitter rear contact (PERC) solar cells, as certified by China’s National Center of Supervision and Inspection on Solar Photovoltaic Product Quality (CPVT). The solar cell manufacturer not only broke its own record, but continues to be the world’s leading producer of monocrystalline PERC solar cells with the highest efficiency. 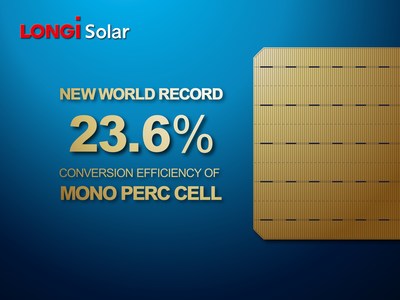 Over the past two years, monocrystalline PERC technology, with its distinct advantages in terms of performance and cost, has been increasingly favored and recognized across the solar cell industry, a sector that has higher requirements for efficiency as a result of the push among solar power producers to reduce the cost per kilowatt hour of solar power and achieve grid parity. As a result, an increasing number of solar cell manufacturers have begun to produce monocrystalline PERC cells.

“LONGi Solar’s plans are to continue to invest heavily in monocrystalline PERC cells, to quickly expand production to meet the increasing demand for high-efficiency cells and to achieve the mass production of cells with a conversion efficiency exceeding 22 per cent, delivering more value to its customers,” stated LONGi Solar president Li Wenxue.